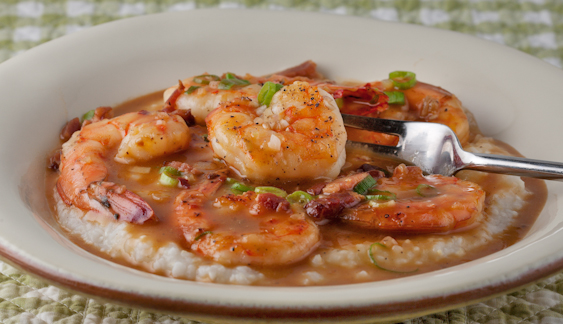 Diners at Webster's in Litchfield often have a hard time choosing between the many unique dishes on the menu.

But ask executive chef Sean Thomas for a recommendation and he may send you back to the basics.

'I just love our shrimp and grits,' said Thomas, the magician in the kitchen who created the menu. 'What can I say? I am crazy for the classics.'

And who wouldn't be? By using the freshest local shrimp and ingredients he can get his hands on, Thomas doesn't have to work much magic to make this dish a hit, but he does anyway.

The shrimp is half the battle, and Webster's goes straight to the local docks to ensure high quality and freshness. The rest is icing on the cake, or in this case, gravy on the grits.

Webster's uses Adluh stone-ground grits and infuses them with cheddar cheese before topping it off with applewood-smoked bacon, tomato, onion, pepper, garlic, sherry and a butter pan sauce.

Add a slice of Tasso ham and shoepeg corn on the side and you have a dish so tasty that your tongue just might beat your brains out. Maybe that's why Thomas considers ordering the shrimp and grits a no-brainer.

In addition to some of the finest shrimp and grits on the Grand Strand, Webster’s also serves other classics, such as Fried Green Tomato Caprese, Crab Cake Napolean, Ahi Tuna Wrap, Crabmeat Crowned Flounder, and Cheddar-Stuffed Meatloaf.